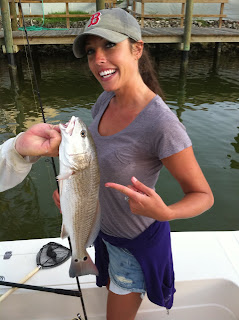 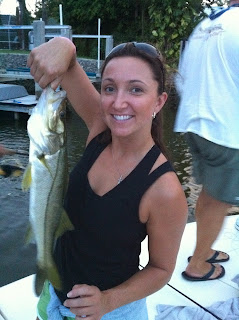 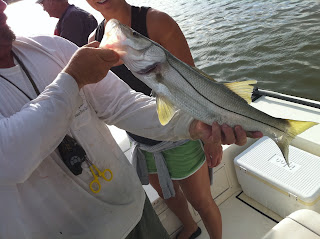 Great fishing for most of the month of July and it looks like it is continuing directly into August.  Bonnie was a bust fishing resumes as normal in the Naples and Marco waters.

July fishing was very good inshore, offshore, Bait, Fly and pretty much whatever you wanted to do.  Lets hope August stays the same it looks good so far.  Snook fishing was very good on both bait and fly most of the month.  The fish were pretty much everywhere, from the passes all the way to the back country.  Great numbers of fish along with some big one’s were in or around all the passes from Cax to Wiggins.  They were hitting most everything including small baitfish flies, White Bait, and Jigs.  The fly fishing was better in the late afternoon and into the night for both Snook and Tarpon.  Morning fishing was good but you needed to be there early, which is typical summer fishing.  The nice thing about morning though, less bugs and we fished to more large floaters and Tarpon in the Back Country.  One morning especially, we landed two 32 and 35 inch Snook and jumped 7 Tarpon up to 40 pounds landing one all on Rz’s Tarpon Muddler in Yellow and Grey.  Bait fishing has been excellent also, fishing a Hamilton Harbor BCS Charity Tourney last week my anglers D.J. and Tom from North Ft. Myers were able to Card out with Two Snook and Two Redfish and win by a very slim margin over 2nd place finisher Todd Geroy and third Place Mike Rucker.  The Tourney was a lot of fun and a great group of guys and gals fished it.  We were lucky to win, the second Redfish was the deciding factor.  Red fishing in the Naples and Marco waters has been very difficult.  We caught ours under the Docks along the Gordon River.  The offshore fishing has been hard to beat the last month.  Great Snapper fishing both inshore and offshore has been awesome.  Large mangroves and if you get out far enough they are catching some Muttons and Red Snapper.  Also out there are scattered Kingfish, Sailfish, Black fin Tuna, and Cobia.  Oh yeah and the Spanish Macks are everywhere off the beaches.  I think this has been one of the best July’s I have ever seen.

What will happen in August?  It looks pretty good.  I do not see anything on the horizon to change things.  Bait is still plentiful and the fish do not seem to be acting in a strange manner.  I would expect a little increase in temps and hopefully a slow tropical season will keep us in business.  It will depend on the Rain if it is heavier than usual then it will be slower fishing if it is steady then the fishing will be good.  If it is less than normal the fishing will be difficult.  Low rainfall and high temps will make thing a little tough, so lets hope for nice steady afternoon rains that keep the temps down in our waters.  Our fish this time of the year need that influx of freshwater it is very important to them and there young one’s.  Offshore fishing should continue strong although I would expect the snapper fishing to slow a bit but other things should pick up.  Small Tarpon fishing in the creeks should be good especially if we are getting steady rain.  Big  Tarpon will be non factor this month but should be back strong in the middle of next month.  The most important thing is to get out and fish.  Have Fun and please catch and release the Snook carefully.

Thanks Roan z.
Posted by Captain Roan zumFelde at 9:27 PM