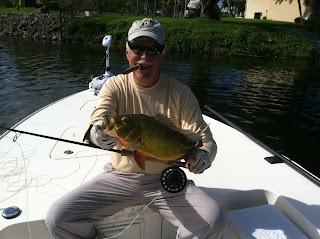 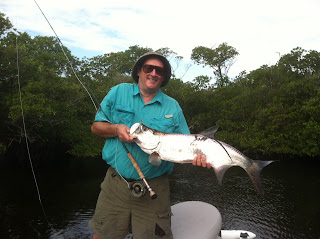 Let us start by saying I hope everyone is having a great Holiday season.  The weather in Naples and Marco has been nothing short of spectacular which has made the fishing much the same.  I know everyone likes a white Christmas but I am happy when we can catch Tarpon and Snook late into December.  Awesome!

Fishing in December has been nothing short of phenomenal.  It seems as if we have been having the best of both worlds winter species like Pompano, Trout, and Redfish creating a mixed bag with Snook and Tarpon, wow can you believe it.  The only bummer has been some sporadic patches of Red Tide.  It really hasn’t affected the fishing much but you can tell it is there on occasion.  Let us start with the winter species.  The Pompano have been excellent especially down toward Marco.  The passes and the flats near the passes have been the best places.  The early morning incoming tides have been bringing them in.  Tipped jigs and sinking flies have been banging them along with Trout and a fair amount of Sheepshead.  The Reds are scattered just about everywhere.  We are sight fishing them on all the flats and they are crushing some small shrimp like patterns.  Especially a new one that we came up with this year.  CJ super shrimp.  Available at the new store at Naples Bayfront.  It doesn’t seem to matter what color, they come in four.  Along with the Reds the flats from Naples to Marco are also producing nice Sheephead and some scattered Trout and even a few Snookies. The fish just seem to be lost I am sure it is due to the unseasonably warm water temps.  Fisherman that are venturing into the Backcountry Creeks around Naples and Marco are finding some great Snook and even some small Tarpon are still showing themselves.  Strikes for the Tarpon are at a premium but keeping the fly in front of them will get them to bite.  Snook are a little finicky on the fly except under the lights which are out of sight.  The Snook in the backcountry creeks are biting but like I said a little confused, they are moving around a lot because I think they are wondering where the colder water is.  There are even a scattering of Reds back there along with some nice Snapper.  Bass Fishing in the canals have been sporadic.  Interceptor has been the best, along with the Golden Gate.  Still some Peacocks hitting there.  I cannot say enough about the beautiful weather we are having let us hope it continues.

Here comes the New Year, and what should we see for fishing in January for Naples and Marco.  Well, this is a good question and one that will be hard as heck to answer.  If the weather holds and we have mild temperatures it should be the same.  I would not bet on this though.  Sooner or later these fronts are going to start streaming this way and we will be into full bloom winter fishing, MAYBE.  Let us hope for the best and be prepared for the worst.  I think it will be a wormer than normal winter but we are still going to see some cold.  If we get cold the most important thing to remember and I believe I say this every year is to just slow down and keep your offerings close to the bottom.  That is where everything will be.  Sinking lines for fly anglers and weighted flies, and for conventional tackle the jigs will be king.   One last thing,  just wanted to let you know we have opened and Indian Pass Outfitters South location.  It is at Naples Bay Resort on the Gordon River in partnership with the Ships Store.  We will be carrying most of the TFO Fly product line including specialty flies tied by local fly tiers.  We also will have the new Spinning and Baitcasting Rods by TFO and Gary Loomis.  Please come by and check it out.  We are almost completely stocked with gear so come on by after the Holiday and check it out.  Well I hope all are having a great Holiday and hope to see you after the 1st of the year.  Merry Christmas Roan z.

Posted by Captain Roan zumFelde at 3:39 AM