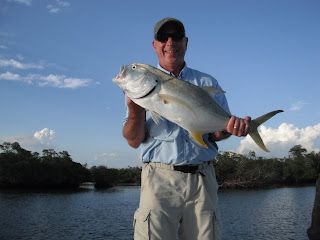 Roan, thanks for the trip... heres the picture of the Jack..

Well,  June fishing so far has been interesting to say the least for Naples and Marco Island.

The last part of May was great, large and small Tarpon seemed to be all over from the inland creeks to the flats on the outside.  A different story for the first part of June.  IT is almost halfway through and we are still experiencing West winds.  Heavy West winds have been hampering the outside fishng and I hope for my anglers that are arriving to fish Tarpon it subsides.  The small Tarpon are still in the backcountry so that is a welcome substitution to the large ones on the outside.  Snook fishing has been nothing short of excellent and should continue throughout the summer.  If the winds subside the beachfishing should be excellent the remainder of June.  Fly fishing has been very good even with the heavier winds but it could even get better.  I would expect the rest of June to be very good barring any more inclement weather.  Redfish, seem to still be available but are somewhat scattered.  Most of the Bays are holding them both on the shore lines and adjacent to the flats.  Sight fishng them has been good bait fishing a little tough since they are traveling most of the time.  Bait fishng in general this month has been a little less than productive due to the heavy winds out of the west.  The other cast of characters are all showing up to keep things lively.  The only down side to the fishng so far as I am concerned has been a little slow of a Snapper bite, but again that could be due to the weather.  If you are coming to Naples or if you live here please check out the full line of Gary Loomis Rods at Naples Bay Resort Ships Store and Indian Pass Outfitters.  Thanks Rz.